A few weeks ago I caught the train into London and signed 80 copies of Dead Man’s Steel for Goldsboro Books. There are still some available to buy for the RRP of £20. Chances are they won’t be around much longer, so if you need a signed copy to complete your collection, now’s your chance. 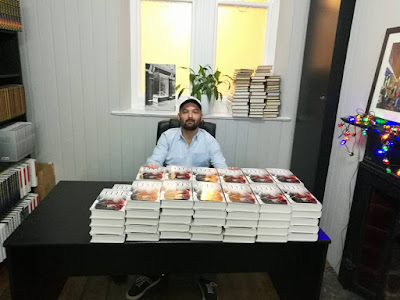 At last, I have completed the Grim Company trilogy. What a journey it has been. When I first read The Grim Company, the first novel in the series, I enjoyed it despite the distracting similarities between the novel and one of my favorite series, The Black Company, and some of the minor other issues. Yet, I enjoyed the book and was excited for the sequel. When I got my hands on the sequel Sword of the North last year, it quickly became one of the best sequels I have read in a series and markedly improved on everything the first book lacked. Now that I have read the final in the series, I can comfortably say that I am satisfied with the conclusion.

The book was also ranked #9 in BestFantasyBook.com’s annual Best Fantasy Books of the Year list. The article author summed up:

Don’t miss it, and if you have not started the series yet, you are missing out in a big way: it’s some of the best fantasy this decade. Book 3 does not disappoint.