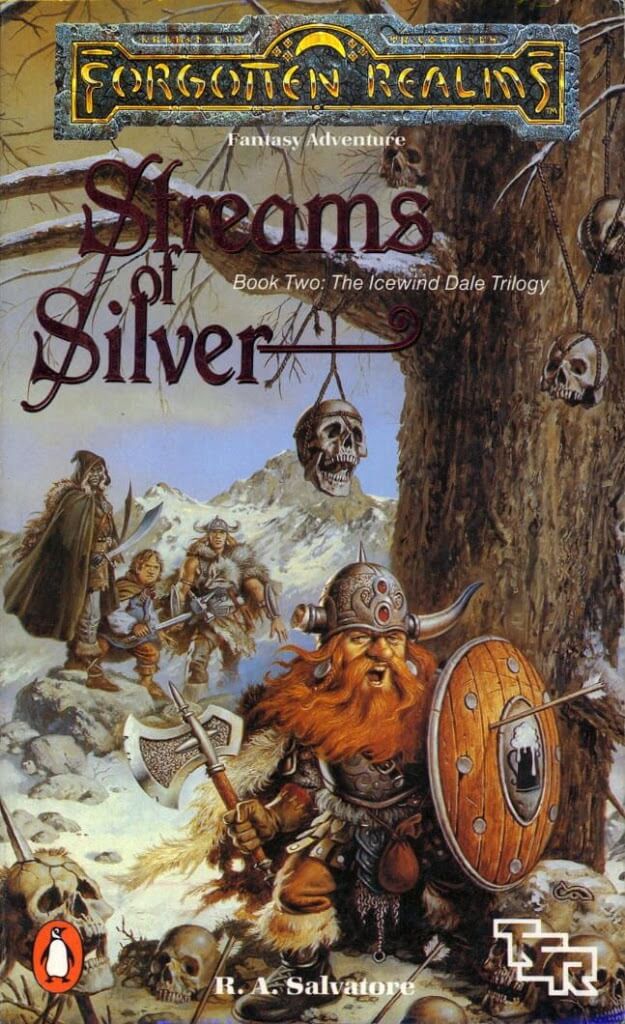 Bruenor the dwarf and his companions Wulfgar the barbarian, Regis the halfling and Drizzt the renegade dark elf set forth from Icewind Dale on the most ambitious of quests: to rediscover the lost dwarven stronghold of Mithral Hall, birthplace of Bruenor and his clan. The road will be long and full of peril, for the Savage Frontier is a harsh place – and hot on their trail is the assassin Artemis Entreri, one of the most infamous killers in the Realms. 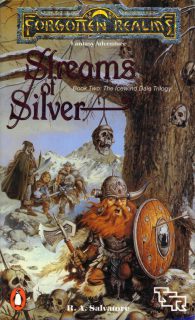 The sequel to 1988’s The Crystal Shard is a fast-faced, action-packed entry into the Forgotten Realms canon that swaps the politicking and warfare of Icewind Dale for a classic quest story. The Companions of the Hall make for an unlikely but effective group as they hack, slash and occasionally talk their way through the many dangers of the North. The relationships between the characters continue to develop, while this time around we get an insight into the mind of the hunter as well as the hunted, with Artemis Entreri’s chapters representing some of the most engrossing in the novel.
At least for me, the writing didn’t quite flow as smoothly as in The Crystal Shard, though this could be attributed to the cumulative edits and tweaks that have been made to the first book over the years. While it’s fun to visit numerous locales such as the City of Sails, Luskan, and Longsaddle, home of the eccentric Harpell wizard clan, the travelogue-like nature of much of the story’s first two acts naturally prohibits the sense of isolation and desperation that made the previous book so memorable.
As mentioned, the introduction of a highly competent nemesis for the Companions – more specifically, Drizzt – provides an overarching air of impending threat, and the anticipation this builds for the eventual showdown is what really drives the story until the third act. An ill-advised jaunt through the Evermoors is perhaps a tad too long and clumsily plotted to really work, while Drizzt’s constant optimism and subsequent disappointment when faced with the surface world’s prejudice towards his kind does an excellent job of building his character and complementing the seesawing elation and despair of the third act and its gut-punch ending – which fakes the death of one character only to (apparently!) kill off another.
The third act is the book’s strongest by far, paying solid tribute to the Mines of Moria while introducing a deadly new foe in Shimmergloom, the great shadow dragon. The inevitable confrontation between Drizzt and Entreri is as memorizing in its psychology as in its swordplay. Once again, Salvatore describes combat in a highly personal, visceral way that sets him apart from most of his contemporaries. Bruenor’s adopted daughter Cattie-Brie gets a little more page time, though she’s largely passive. In fairness, this actually works in the story’s favour – it helps build the legend of Entreri, a man so dangerous and terribly in-control that even the feisty daughter of a dwarven clan-leader struggles to find the courage to act against him. Elsewhere we get more female representation in the form of Sydney, an ambitious apprentice in the Host Tower of the Arcane, and a cameo from Alustriel Silverhand. Interestingly, Alustriel refers to her sister Dove being “much younger” – even though both are well into their seventh century of life. At this point, the power (and prestige) creep that eventually made the Chosen of Mystra so problematic hadn’t yet taken root.
Streams of Silver is a fine sequel, laying the groundwork for a rivalry that would go on to become one of fantasy’s finest, and fleshing out one of the more iconic regions of the Forgotten Realms. It’s quite remarkable that R.A. Salvatore was able to put out a follow-up to The Crystal Shard (and indeed, a third and final part) so quickly while avoiding any missteps. You get the sense he loves this world and these characters, and ultimately this shines through on every page.
**** out of *****