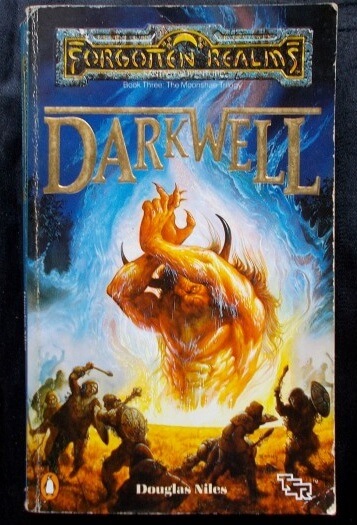 Tristan Kendrick, the recently crowned High King of the Ffolk, must face his greatest challenge yet. The God of Murder himself, Bhaal, is threatening to cross into the mortal realm by means of a corrupted Moonwell. If he succeeds, the Moonshae Isles are surely doomed. As the last remaining druid of the Isles, Robyn must work with Tristan in countering this terrible threat, despite her own hurt at the betrayal he has dealt her.

The final volume in The Moonshae Trilogy is by and large a solid conclusion to the series. There’s a lot of narrative to get through here, and Niles does an admirable job of guiding to the story along at a brisk pace without it feeling rushed. Even more so than in the previous two novels, this is a book heavy in D&D lore, very much written with the underpinning mechanics guiding the action. Witness the following, pleasingly meta, nod to the obvious:

‘Grimly Hobarth shook off these doubts. He had cast his die, and he would live-or perhaps perish-with the roll.’

Cleverly – and perhaps – bravely – the otherwise predictable plot is given a good shake up early on, with our hero Tristan betraying the love of his virginal future bride-to-be with a minion of Bhaal’s, who is disguised as a sultry redhead. Initially there is a suggestion of foul magic at play – but in a somewhat surprising turn, it is revealed he was simply drunk and gave in to temptation. The “will they, won’t they” dynamic between Tristan and Robyn adds some spice to what is an otherwise straightforward story of good versus evil.

Another pleasing aspect of Darkwell lies in the author’s willingness to be ruthless when necessary. Aside from Tristan’s infidelity, the evil characters don’t hesitate to rape, murder and pillage. The gross, corpulent High Priest of Bhaal, Hobarth, wastes no time in taking full advantage of the former High Druid of the Moonshae Isles – in every imaginable way. The brutal death of one of the primary antagonists, following a cat-and-mouse chase with a displacer beast, is surprisingly effective. After the unfocused Black Wizards, this is a welcome return to the kind of storytelling that made Darkwalker on Moonshae such a success.

There are problems. Some of the story beats are rather similar to those earlier in the series. In one instance – the birthing of Bhaal’s Children – this works in the book’s favour. In others, it merely feels like we’re treading old ground, except this time we’re getting an abbreviated version due to the book’s relatively short running time. One or two plot points feel contrived: a vital alliance occurs due to a fortuitous meeting on the open sea. The final battle is frankly not particularly believable. Once again, Canthus the moorhound is in fine form, surviving all manner of brutal encounters and saving the day like the Moonshaes’ very own Lassie. Not content with taking down a werewolf in the first book, Darkwell ups the ante for this mightiest of mortal dogs.

Though a slightly uneven book, Darkwell succeeds in recapturing the magic of the opening novel in the trilogy. While the characters won’t leave much of an impression, several inspired scenes ultimately ensure its position among the pantheon of more memorable Forgotten Realms novels.