Elminster of Shadowdale is missing, presumed dead. The magic-user Midnight and her cleric companion Adon stand accused of his murder. Both are to stand trial before the lords of Shadowdale. Meanwhile, the god of tyranny, Bane, and the god of death, Myrkul, plot to recover the Tables of Fate. It was the theft of the tablets that resulted in Ao stripping the gods of the Forgotten Realms of their power and exiling them to the mortal plane. 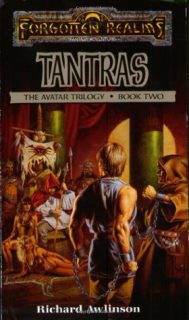 The second book in The Avatar Trilogy by Scott Ciencin writing under the collaborative pen name Richard Awlinson (Troy Denning penned the third) is a slight improvement on Shadowdale is many respects. Though Midnight is the hero of the story, it is her erstwhile friend Cyric who steals the limelight as he quickly undergoes an alignment shift from something-neutral to hardcore chaotic evil. Cyric lies, cheats, murders and betrays his way through friend and enemy alike. Though his rapid transformation isn’t entirely believable, the book does a good job of presenting his motivations to the reader. Interestingly, the traditional bastion of good and justice that is Shadowdale is painted in a less than flattering light in the first part of the story. Even paragons of virtue like Storm Silverhand are baying for the blood of our (innocent) protagonists, painting Cyric as more of an anti-hero than a villain, at least early on.
Bane and Myrkul reprise their roles as the primary villains, assisted by the largely incompetent Zhentarim. In truth, not a great deal happens for much of the book. A lot of time is spent following our heroes as they flee first the Shadowdale militia and then a trio of assassins sent by Bane to retrieve Midnight. The mercenary warrior Kelemvor’s curse is central to his character arc and culminates nicely in a visceral scene with Bane – whose habitation of the priest Fzoul Chembryl’s mortal form has thankfully imbued him with some restraint following his lamentable showing in Shadowdale.
As mentioned, this is Cyric’s book. It is sometimes hard not to cheer for this ambitious young survivor from Zhentil Keep as he triumphs using skill and cunning in the face of overpowered wizards and godly avatars. Cyric’s frustration with Adon, the priest of Sune who was rendered near catatonic after suffering a facial injury, is eminently understandable. Midnight remains the worst of the protagonists, swept along by the story’s requirements and serving mainly to establish the motivations of the male characters.
Though the story suffers from dull stretches and the writing is only a small step up from Shadowdale – that is to say, merely perfunctory rather than raw – the final act in the city of Tantras steps things up, presenting a dystopian vision of Lawful Good intolerance taken to extremes. The battle between the avatars of Torm and Bane, though silly, remains one of the more memorable scenes in the great canon of Realms literature. Though, one thing I’ve always wondered about: if Bane’s ritual to achieve his giant avatar form involved killing all of the assassins in the Realms (conveniently removing the class from 2nd edition D&D), how and why did Artemis Entreri survive?
In summary, Tantras is middling book in a generally poor trilogy that remains essential reading for fans of the setting. Rather like the curate’s egg, there is good to be found if you look hard enough.
** 1/2 out of *****